AT THE DAWN OF A NEW CENTURY 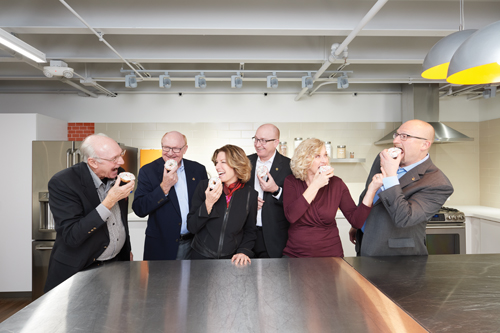 The Jones family is celebrating the 100th anniversary of Dawn Foods this year, but they weren’t always bakers. The family entered the business in 1935, when patriarch Marlin Jones joined Dawn Donut Company as a bookkeeper.

Though the family didn’t found Dawn, now an international, multibillion-dollar company, they continue to grow the business under third-generation leadership.

Business partners Eugene Worden and Grover Lutz founded Century Baking in 1920 in Jackson, Mich., where the company is still headquartered today. Word soon spread to neighboring bakers that the bakery’s donuts were the best. Bakers went to Worden and Lutz and asked for their recipe, but they kept it secret. Instead, they sold a dry mix and renamed their business Dawn Donut Company, after the time of day donuts were baked.