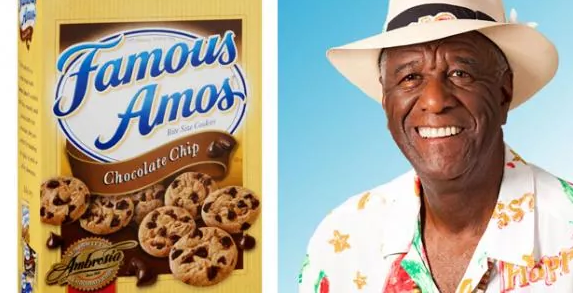 A man gifted with the ability to view the world with optimism, Wallace “Wally” Amos, Jr. is the smiling entrepreneur behind Famous Amos Chocolate Chip Cookies.


Growing up, Wally lived with his aunt Della in New York City. It was through her that Wally had his first chocolate chip cookie, a taste he would never forget. Though he never graduated from high school, Wally served in the Air Force prior to working in retail and as mail room attendant at William Morris Talent Agency. Within one year at the talent agency, he was promoted and became the first African American talent agent.


When Amos left William Morris, he decided to open his own management agency on the west coast and during his free time, he picked up a new hobby – baking. It wasn’t until 1975, when the entertainment industry had taken its toll on Amos, that he decided to modify his Aunt Della’s recipe and start selling chocolate chip cookies. Through his talent agency connections, Amos was able to start his company and open his first storefront in Los Angeles with $25,000 that he gathered from his celebrity friends. In its first year of business, the company sold $300,000 in cookies and by 1982, the company reached $12 million in sales. In 1986, Amos was awarded one of the first Awards of Entrepreneurial Excellence by President Reagan.


Although Wally was the man behind the Famous Amos cookie recipe and the face behind the brand, he had little business knowledge and struggled to hire people that did. Unfortunately, Amos had to sell his company only ten years after opening. In 1988 the Shansby Group bought Amos’ company and for a brief period, Amos stayed on board as paid spokesperson.


No longer the owner of Famous Amos, Amos continuously reinvented himself with ventures such as Uncle Noname Gourmet Muffins (now known as Uncle Wally’s Muffin Company) and The Cookie Kahuna. Amos also wrote several books, served as an inspirational speaker and was an inductee into the Babson College Academy of Distinguished Entrepreneurs. In 2018, Amos set his sights on another business venture and started “Aunt Della’s Cookies.” Though he has struggled to get the business running, Amos is still baking, still sharing cookies, and still staying positive.


Throughout his entire career, Wally always worked hard, stayed positive and never gave up. Wally’s drive to succeed in the bakery industry was continuous and it was through his love of baking, his beaming smile and “can-do” attitude that Wally has been able to share his passion with the world.

Today, his original company, Famous Amos, is an international brand and is part of the Ferrero Group.