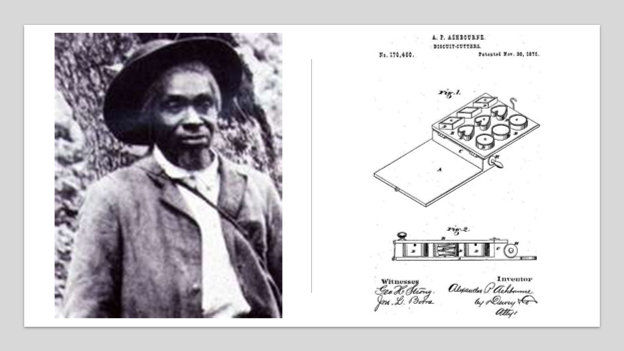 Alexander P. Ashbourne was a nineteenth century innovator who brought the spring-loaded biscuit cutter and revolutionized the process to refine and treat coconut oil.

Though not much of Ashbourne’s life is documented, we know he was born into slavery in Philadelphia in 1820. In his early years, Ashbourne was a wheat harvester alongside his parents. A born visionary, he sought new ways to making harvesting easier and more efficient.  Although his ideas never made it to fruition, his initial failures did not inhibit his drive for creating and innovating in the years to come.

Freed from slavery in 1847, Ashbourne continued to live and work in Pennsylvania. By 1863, he was a well-known caterer and served the elite at weddings and buffets. It was through his work as a caterer that he noticed biscuits were hand-patted and lacked uniformity. From here, he set out on a decade long mission to create a device that would provide consistency and efficiency in the biscuit-making process. In 1875, Ashbourne was awarded a patent for his spring-loaded biscuit cutter. This invention enhanced the biscuit making process as the cutter had a board to rollout the dough that was attached to a metal plate with cutter shapes mounted on it. Once the dough was rolled, the cook would then need to push down on the spring-loaded cutter and the dough was shaped into biscuits and easily released.

Ashbourne’s ingenuity continued and his focus turned to oil. He received two patents (1877 and 1880) for refining and preparing coconut oil. His process for oil refinement included filtration, bleaching, heating to a high temperature, and hydrogenation to remove unsaturated fatty acids from the oil. Thanks to Ashbourne’s work, coconut oil could be used domestically, including in the preparation of food, cosmetics, etc.

Ashbourne lived out his days in Oakland, California, where he ran a convenience store. He died in 1915 at the age of 95. His innovations continue to benefit us today. Ashbourne can be remembered the next time you enjoy biscuits or cook with coconut oil.

7 African Americans who changed the way we cook and eat – (caliplate.com)