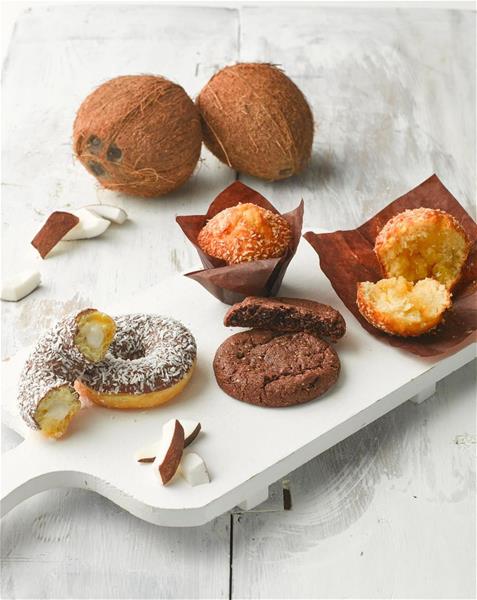 In response to growing demand for the on-trend flavour of coconut, Dawn Foods has launched a seasonal range of finished and part finished coconut bakery products including a baked cookie, a cookie puck, a filled ring donut and a tulip muffin.

Traditionally a flavour associated with summer and the exotic, coconut is now established as a popular all year-round flavour, with research confirming that globally as an ingredient, it has had the highest growth rate in the past three years; it was also named flavour of the year for 2016 (Innova Market Insights & Mintel 2016). From coconut water, to coconut oil, butter, milk and even flour, it’s the taste of today.

The new American-style Cookies are available either finished frozen to defrost as required or the cookie ‘puck’ is ready to be baked off from frozen for an enticing aroma and freshly baked taste. Made to an indulgent palm oil-free, all-butter recipe, both cookies have a crunchy outer and soft inside and feature real coconut pieces and dark chocolate chunks throughout to deliver on both flavour and texture.

For consumers who like a fresh and fruity taste with their coconut, Dawn’s Coconut & Pineapple Muffin is light textured but full of natural flavour as it is filled with a real fruit pineapple jam. This premium tulip-shaped muffin has a handmade, artisanal look too with coconut pieces throughout and a toasted coconut flake top. Palm oil free, the product has a great texture combination with a satisfying crunch.

Following on from the success of Dawn’s premium filled ring donuts, the company has launched a coconut classic ring donut too. With its light fluffy texture and a double coconut hit from a sweet coconut filling and a covering of coconut flakes plus a smooth chocolate flavour coating, this donut looks appealing and has indulgence in every bite. There’s no hassle baking from scratch either as the donut is supplied finished frozen for defrost, so no mess or wastage.