Celebrating a Century of Donuts

Dawn Foods takes a look back at donuts through the decades.

Even though the true origin of the donut is hard to pinpoint, the impact and popularity they’ve held throughout the years is obvious. Every culture and country has some version of fried dough – the basic definition of the beloved sweet treat. Even in the United States, there were versions of the donut that predate the start of the country, arriving with the earliest settlers.

What is for certain is that 100 years ago, in 1920, two key milestones in the history of the donut took place:

1. Century Baking changed its name to Dawn Foods and owners Eugene Worden and Grover Lutz expanded in Jackson, Michigan, to accommodate production of their successful donut mix, a yeast raised formulation that served as the starting point for some of Dawn’s most successful mixes used today. Dawn also sold a traditional cake donut mix known as Dawn Old-Fashioned, a spice flavored mix many bakers customized by adding their own proprietary flavors.

2. In New York City, the first automatic donut machine was created by Adolph Levitt, who needed the creation at his bakery to keep up with the demand of hungry theatergoers. Customers now could enjoy Broadway and the added show of dough floating down a river of oil during the production process. Read the full history.

These two advancements set 100 years of flavor and innovation in motion. Here, we take a look at the donut by the decades and focus on what’s next.

According to Smithsonian Magazine, By 1931, the New Yorker was whispering to its readers, "We can tell you a little about the doughnut-making place in Broadway," and described how "doughnuts float dreamily through a grease canal in a glass enclosed machine, walk dreamily up a moving ramp, and tumble dreamily into an outgoing basket." Donuts were becoming equal treat and entertainment, earning Levitt a whopping $25 million annually for his machines. It was also in this decade that an American donut institution – Krispy Kreme was born. The most popular flavors? The perennial glazed and donuts flavored with traditional spices and nuts, and those covered in sugar. The donut was even hailed as the “hit food in the century of progress” at the World’s Fair in 1933.

As the years marched on, donuts continued their rise in popularity. Similar to World War I, Red Cross women, later known as Doughnut Dollies, doled donuts out as a staple for World War II war heroes. The founder of Krispy Kreme returned from the war with visions of expanding his growing empire. However, competition entered the landscape with the founding of Dunkin Donuts in Massachusetts. Dunkin Donuts even introduced a proprietary donut with a “handle” on it, making it perfect for holding onto to as customers dunked their donuts into steaming hot cups of coffee. 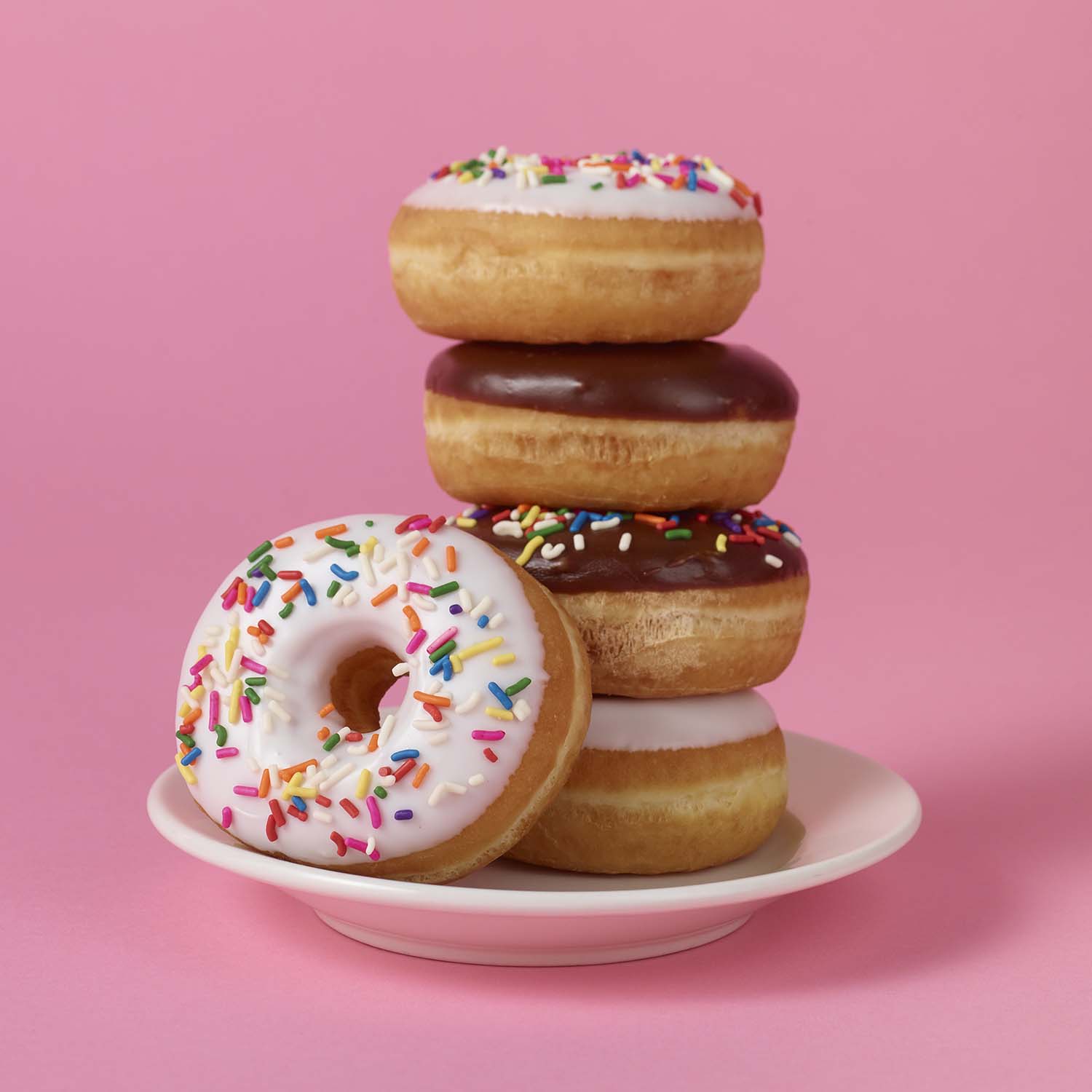 Dawn also introduced the next version of Raised A and established itself as a leading partner for bakers who wanted donut mixes they could count on for performance, quality, and taste.

What else changed at this time? How we spell the word donut. Traditionally, it was always spelled doughnut. But, as early as the 1930s and more frequently in the 1950s, people started to use donut interchangeably. Today, both spellings are acceptable, but donut is the more common.

The second half of the 20th century saw the rise of donut flavors and shapes. Dunkin Donuts boasted offering 52 flavors of donuts. In the late 1970s, holiday promotions also started to become popular, offering customers Easter egg donuts, bunnies, and other fun treats. And while donut popularity was on a steady incline through the 1960s and 1970s, there was a blip in the 1980s with the introduction of the donut’s savory counterpart – the bagel. Bagels grew in popularity and started to chip away at the donut’s leadership as the breakfast treat of choice, especially in major US metropolitan areas like New York City.

However, by the 1990s, things turned around for our beloved donut. The large donut chains where growing. Krispy Kreme expanded from its traditional southern roots into the North and West and saw a 20% increase in sales. Dunkin Donuts also continued to grow, with stores in twice as many states as Krispy Kreme. Dawn was also growing – we entered into the distribution business in North America and grew globally into Western Europe.

Flavor profiles also started to evolve. As we came to the end of the last century, bakers were exploring with seasonal flavors, different spices, and rich chocolates. The 1990s saw a rise in chocolate as an overall trend with things like Oreo cereal and Dunkaroos. This chocolate obsession extended into other areas, including donuts.

The turn of the century also marked an evolution for donuts. One of the most significant advancements was the invention of the cronut. Half donut, half croissant, this treat was invented in 2013 by New York City pastry chef Dominique Ansel of Dominique Ansel Bakery while working at Fauchon in France. He then brought it back to New York, and it became an overnight sensation, even labeled as one of the best inventions of the year.

Donut flavors have also taken off this century. As tastes become more global and experimental, so do donuts. With everything from bacon maple donuts to bacon, egg, and cheese-stuffed potato donuts, there is nothing that is off limits. One new flavor that is giving the favorite glazed donut a run for its money? The coconut donut. By 2019, its popularity had increased 114 percent, according to research by Grubhub. Other flavors ranking in the top 10? Rainbow donuts, which are made with colorful dough; cinnamon roll donuts, including varieties that are dusted with cinnamon sugar; and donut sandwiches, which are savory treats that are stuffed with things like sushi and hamburgers. All of these flavors have become more popular over the last years, with three times as many orders made between 2018 and 2019, according to the same Grubhub study.

Dawn Food also added to the growing donut varieties this century with the introduction of its Extended Shelf Life donut mix in 2000 and its newest product – Sourdough Donut Mix, released this year.

What does the future hold for donuts? It’s unclear. But everyone agrees that the donut will be around long into the future, if not forever. Do you have thoughts on your favorite contemporary donut flavor? What you’d like to see next in donuts? Share your ideas with us! 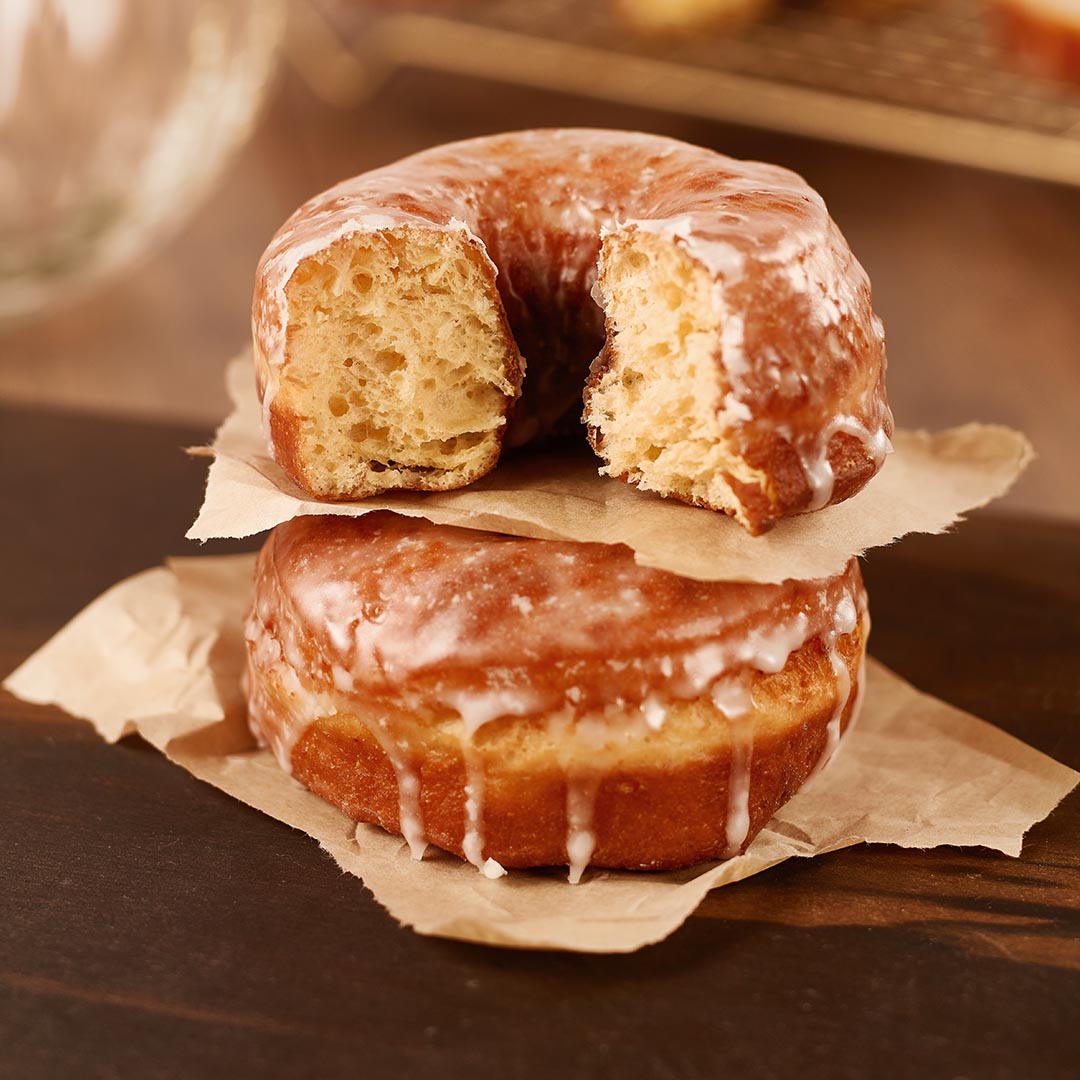 A Return to Holiday Bakery Traditions

2020 Taught Us What Matters Most