Voodoo Doughnut introduced vegan items roughly a decade ago. As demand for these items grew over the years, switching to a prepared mix to make vegan donuts helped the Portland, Oregon-based business increase production and consistency.

So the donut maker decided to partner with Dawn Foods to create new versions of its prepared vegan mixes that could be distributed on a larger scale.

“Anything from scratch is difficult to do in volume,” Pogson says. “Anyone can make a delicious donut—but try to make 10,000 before 6 a.m. With the stability of a mix, [we knew] as we grew, we could produce hundreds a day; and they should all taste and look alike. Dawn offered us national coverage with great logistics and a better price.” 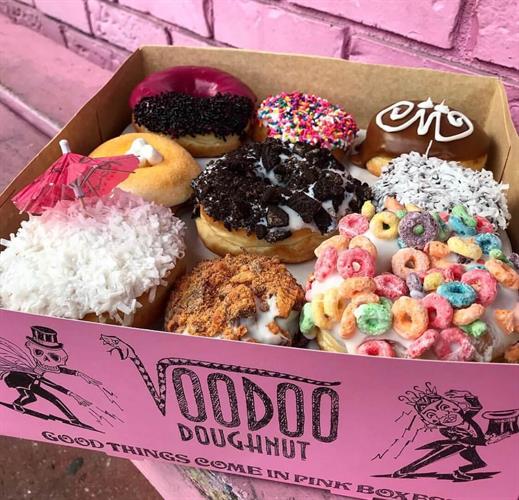 Dawn’s development team made a few adjustments to one of its existing formulas to produce a mix for Voodoo’s traditional yeast-raised donut, according to Dawn Foods National Vice President—Technical Sales, Paul Caske.

Without dairy, the chemistry involved in vegan cake donuts differs from the traditional version. Finding a formulation with the right texture, taste and other elements meant Dawn’s R&D team needed to consider ingredients it might not have traditionally used before, so the vegan mix took a bit longer to create.

Eggs are a very functional ingredient in cake donuts and not being able to use eggs pose some significant challenges. In addition, getting the flour blend and the right amounts of sugar is critical.

The team crafted eight or nine iterations of the mix over the course of a few months and presented its top picks to Voodoo.

“We finally got to a point where [everyone] said, ‘OK, let’s run [a sample test in stores] and ask customers what they think,’” Caske says. “Once customers started saying, ‘This is really good,’ we knew we had it. We improved on the color, flavor and texture, compared to what they were using before.”

Voodoo rolled out regular use of the mix in September.

“We want things to stay the same; we don't want to switch out equipment, we want to keep the recipes relatively the same,” Pogson says. “Dawn listened to our concerns, and it was a seamless transition from one product to another. Even our employees were surprised how easy it was—and they were very pleased with the quality of the product.”

Consistency remains a key focus as Voodoo prepares to enact future expansion efforts. The company, which currently has seven locations, opened stores in Hollywood in 2017, Denver and Orlando in 2018. Voodoo is opening a second Denver location on June 7, National Donut Day, and hope to open in Houston, Texas later this summer. Pogson says Voodoo is also looking into operating in several more markets.

“Without a mix, good luck—you can make 300 vegan donuts, and 178 will be perfect,” Pogson says. “To provide them across America, which we hope to do in the next five years, we’d like it to be as stable as it can.”

Using ingredients from regional suppliers—which can vary due to being grown in different conditions across the country—could potentially cause product variations from location to location, Caske says.

A national provider, on the other hand, often has the footprint to provide standardized results.

“People’s expectation is that the vegan cake donut they eat in Portland is going to be the same one they have in Florida; if a product isn’t consistent and can’t be delivered every day, that really impacts a major brand,” Caske says. “Our formulators are able to make adjustments to guarantee our product, regardless of what plant produced it or distribution venue delivers it, is going to be the exact same product.”

In addition to mixes, Dawn also now supplies Voodoo Doughnut with icing, packaging and other items—in whatever part of the country they’re needed.

“We’ll manufacture a vegan cake donut mix in Jackson, Michigan, but stock it in warehouses in Seattle, LA, Dallas and Miami where Voodoo Doughnut shops are,” Caske says.

Dawn’s distribution system, Pogson says, is proving to be a major benefit as Voodoo locations continue to multiply.

Have questions? Can Dawn Foods help your bakery? Contact us.

Getting More Done Starts at Dawn