In cities across North America, St. Patrick’s Day means a celebration of Irish culture, parades and tons of the color green. And for bakeries, it can mean an opportunity to make some green.

Like a number of other holidays, the celebratory St. Patrick’s Day spirit makes customers hungry—literally and figuratively—for something special. And donuts offer a canvas for creativity; bakeries can experiment with festive flavors and colors and even unique sizes and designs to appeal to consumers’ appetites.

“Philadelphia has a really large Irish-American population, so St. Patty’s Day is a big deal here,” says Matt Fein, culinary director at Federal Donuts, a local donut shop known for innovative flavors. “People come out [to the bakery] because they want to celebrate, and that gives us a good reason to put out items that we might not normally put out. If people get wind that you’re going to have a special donut just for one day, one week or one month, they go out of their way to try it before it’s gone.”

Fein, for instance, was inspired when he came across the recipe for Irish potato candy, a local seasonal confection that looks like a spud but doesn’t actually contain potato. Cream cheese, butter and sugar are rolled in coconut and cinnamon until the sweet resembles a potato.

Based on the candy, Fein developed Federal Donuts’ Irish potato donut, which is dipped in a cinnamon and cream cheese glaze, then topped with sugar, spice and toasted coconut. 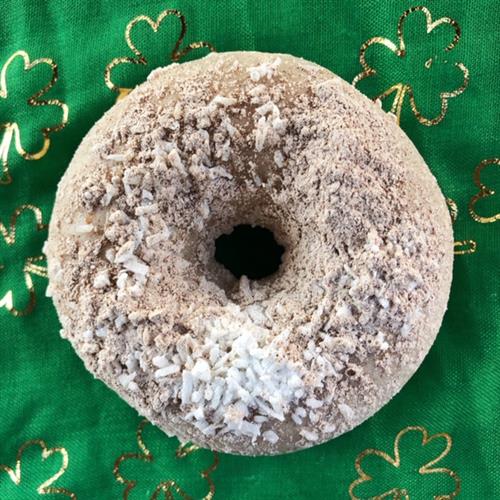 Colleen Ontko, general manager at Jack Frost Donuts in Cleveland, found her muse in another seasonal treat. Inspired by seasonal mint flavors, she created a donut sandwich consisting of a split-glazed donut filled with mint-flavored cream and topped with gold-coin sprinkles. 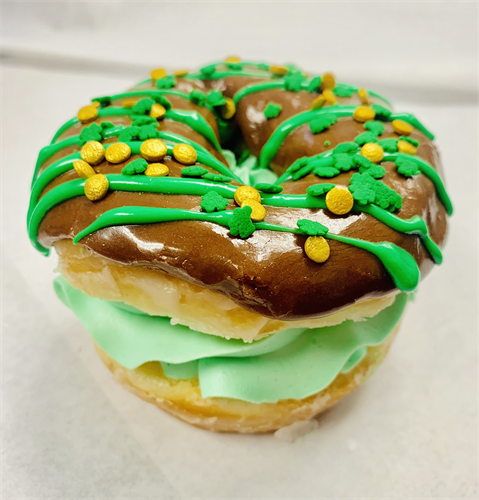 Last year, the donut shop offered a four-pack of holiday donuts, including a green-glazed, Lucky Charms-topped vanilla donut. In addition, Main Street collaborated with nearby Beach Haus Brewery on a new donut infused with the brewery’s own Irish coffee stout.

“We topped that with a homemade glaze that we also made with stout, and put a chocolate drizzle on top,” Rizzuto says. “What we ended up with was a delicious sort of beer- and coffee-flavored donut.” 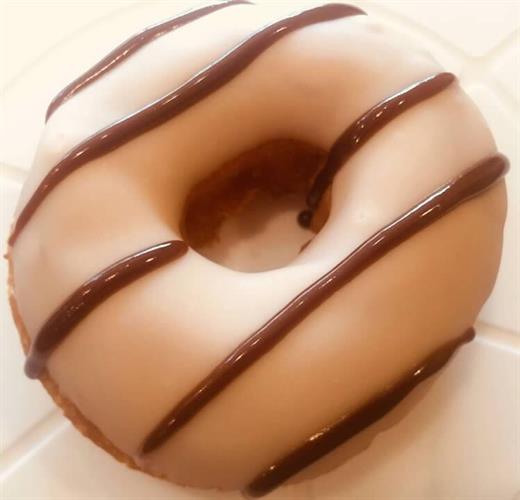 The holiday’s iconography—the Irish flag, pots of gold, rainbows and shamrocks, for example—is great fodder for decorations. At Jack Frost Donuts, a buttercreme application turned a simple dessert into a spectacular one when a raised yeast donut was decorated to look like a leprechaun’s face.

The bakery created another St. Patrick’s Day donut with a 3-D design. Grass-green buttercreme was topped with a rainbow made of sweet and sour candy, a chocolate caramel candy pot of gold and tiny house-made chocolate coins sprayed with edible gold dust. 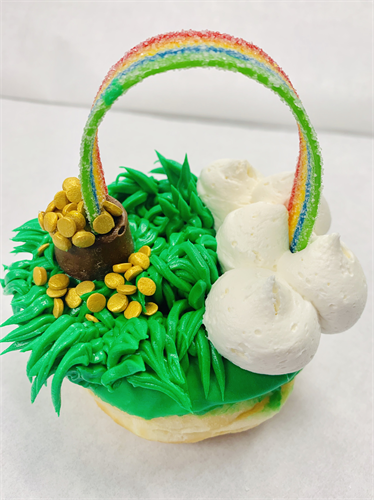 Wherever your creativity takes you, it pays to get there early. “I try to stay at least two to four months ahead [of the holiday],” Fein says.

Planning is important not only for production, but also marketing. “You want to take really good pictures for social media, and you want to do that at least three or four weeks in advance of the actual holiday,” says Ontko, who previews holiday donuts on Instagram and Facebook so customers know about them early enough to place orders.

In addition to social media, bakeries find creative ways to promote their limited-time holiday offers in-store. Jack Frost sells raffle tickets in the days leading up to St. Patrick’s Day. Each of the two winners—who are selected on St. Patrick’s Day—wins free donuts for a year.

“We have one of the biggest St. Patrick’s Day parades on the Jersey Shore,” Rizzuto says. “It’s very crowded and we sell a lot of donuts.”

St. Patrick’s Day may not be one of the biggest holidays on the calendar, but with commitment and creativity, it certainly can be among the most lucrative.

Inspiration for Bakeries During Grad Season