Bakery sales tend to cool down after the busy holiday season. Waiting in the wings, however, is Valentine’s Day, when bakeries have ample opportunity to show some love to a holiday ripe for sales.

And the love of this holiday is not lacking among consumers, who planned to spend $19.6 billion on Valentine’s Day last year—the second highest amount in more than a decade, according to the National Retail Federation. The NRF also predicted people would spend an average $89 on their significant other. Candy was expected to account for $1.8 billion in spending, with 55 percent of consumers planning to give it.

With sweet treats playing a crucial role in the holiday and these encouraging statistics in mind, bakeries can capitalize on Valentine’s Day to bolster sales.

While many bakers stick to traditional Valentine’s Day flavors (chocolate and fruit) and colors (reds and pinks), some experiment with unique formats and product bundles to appeal to various consumer groups.

For example, Cupcakin’ Bake Shop in Berkeley, California, offers themed chocolate-covered strawberry, fondant heart-topped and other decadent cupcakes. The customers who buy these treats to share with their significant other often don’t want a full dozen, according to owner Lila Owens. So instead, the bakery offers a smaller, half-dozen bundle, as well as packages of 12 mini cupcakes.

“They’re good for sharing or to give as a gift,” Owens says. “The half-dozen has become super popular; it doesn’t feel like so much for two people.”

And though Valentine’s Day traditionally celebrates romance, consumers increasingly use the holiday to recognize family members and friends—a trend bakeries should capitalize on.

“Valentine’s Day has become about celebrating love for whoever you want, rather than just your romantic partner,” says Jacqui Okum, owner of Strawberry Blonde Bakery in Ottawa, Canada, which sells a variety of sweet and savory baked goods.

Okum noticed a growing number of customers celebrate Galentine’s Day, a Valentine’s Day spinoff that honors female friendship, on or around Feb. 14. Along with individual desserts like heart- and lips-shaped cookies and Hostess-style cupcakes, she also started selling larger themed treats that are easy to split.

“We want to market something more shareable than individual things,” she says.

In fact, the evolution of Valentine’s Day toward a group celebration holiday—whether among friends or family members—highlights an especially strong opportunity for cake sales.

Bennison’s Bakery in Evanston, Illinois, for example, offers a variety of shareable Valentine’s Day offerings, many of which are cake or cake-based. These include 8-inch chocolate leaf tortes, marzipan fruit tarts and heart-shaped red velvet and ombre cakes, as well as petit fours made of yellow cake, topped with raspberry jam and coated in white chocolate. 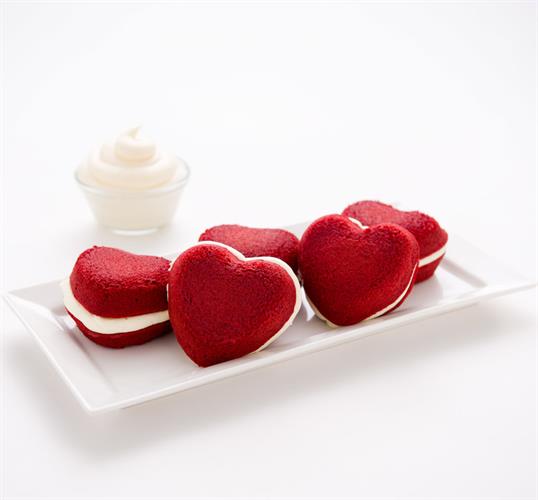 While previous sales can provide insight into the quantities to make, the day on which the holiday falls can also impact sales, according to Jory Downer, certified master baker and president at Bennison’s.

“Valentine’s Day is always better if it falls in the middle of the week,” Downer says, because then customers buy themed desserts to enjoy on the day of the holiday as well as separate treats for weekend celebrations.

Other factors affecting sales are less predictable, such as weather. If pre-Valentine’s Day weather conditions suggest sales might be lower than previously anticipated, Bennison’s will adjust production plans and freeze some assembled sheet cakes for future use, Downer says.

Working with versatile bakery ingredients, like cake mixes and buttercremes, can also help ensure leftovers are put to use.

Finished products don’t have to go to waste, either. If Bennison’s ends up creating a few more finished Valentine’s Day products than needed, Downer doesn’t mind: He says he’d rather end up with an excess than run out. “We discount them [when the holiday is over],” he says. “I’m not afraid to have some left the day after—if you don’t, you didn’t start with enough.”

One key to ensuring demand for Valentine’s Day cakes and other sweets is effective promotion.

“It’s a very consistent campaign,” she says. “The posts are almost daily and kind of in-your-face until the fourteenth.”

These efforts encourage both advanced orders of themed treats, as well as walk-ins—twice as many, in fact, as Cupcakin’ sees on non-holidays.

For a successful and profitable Valentine’s Day, think in terms of your relationship with your customers. Create offerings that meet their celebration needs, anticipate the amount they’ll want, and clearly communicate your offerings ahead of time on the channels they use most.