Long heralded as the most important meal of the day, breakfast represents a major sales opportunity for bakeries.

“Depending on what kind of bakery you run, breakfast might make or break you,” says Bernadette Shanahan-Haas, director of operations at the Retail Bakers of America. Full-line bakeries selling donuts, sweet rolls and coffee cake depend on early risers to keep their doors open, while bakery-cafes bolster their lunch menus with morning offerings like crepes, bagels and muffins.

And consumers in the U.S. and Canada have a big appetite for dining out in the a.m.: Twenty-one percent eat breakfast away from home, according to a Nielsen survey. Meanwhile, morning snack occasions have surged 17 percent in the U.S. since 2010, according to The NPD Group. The research firm forecasts the consumption of breakfast and morning snacks, both at and away from home, will increase 5 percent through 2019—faster than the U.S. population growth.

That spells big opportunity for bakeries. Today’s consumers are juggling busy schedules, foodie expectations and health-consciousness. Here are four ways to get their mouths watering—and their wallets open—first thing in the morning.

Make It Handheld and Filling

“For most working people, eating a full breakfast is a luxury,” says Medy Youcef, pastry chef at New York food market Smorgasburg. “Maybe they get up early to make eggs and bacon once or twice a week, but most just don’t have time.” And for many, a full breakfast includes a savory or protein element. Wanting to offer customers something innovative, Youcef began experimenting with ways to tuck more savory ingredients—chorizo, bacon, sharp cheddar cheese and eggs—into a traditional muffin form. The result? The Bruffin: a fist-sized grab-and-go meal that quickly drew lines of market visitors.

Shanahan-Haas isn’t surprised that handheld items like the Bruffin are popular. “A lot of our retailers are seeing a surge in convenience-based products,” she says. “And for commuters and busy parents, how quickly they can get in and out and eat breakfast on the go can be a defining factor to even step in your door.”

“Bakeries are usually just croissants and scones and muffins, but what I discovered very quickly is that people kept asking for protein.”
—Andy Clark, founder, Moxie Bread Co.

That’s the case at Moxie Bread Co., in Louisville, Colorado. “We have a substantial breakfast commuter rush and limited seating, so a lot of what we do is portable,” says founder Andy Clark. “That’s the heart of how we’re able to keep up with long lines and turn tables faster.”

For the bakery’s popular King Egg, Clark presses croissant dough into a muffin pan, then fills each cup with an egg and seasonal ingredients, like pickled onions, kale or aged gruyere. “Bakeries are usually just croissants and scones and muffins, but what I discovered very quickly is that people kept asking for protein,” he says. “So we listened to our customers and figured something out.” Muffins aren’t the only bakery form that can be grab-and-go and substantial. At Cafe Tola in Chicago, breakfast empanadas are filled with chorizo, honey ham and scrambled eggs, and black beans, goat cheese and plantains. 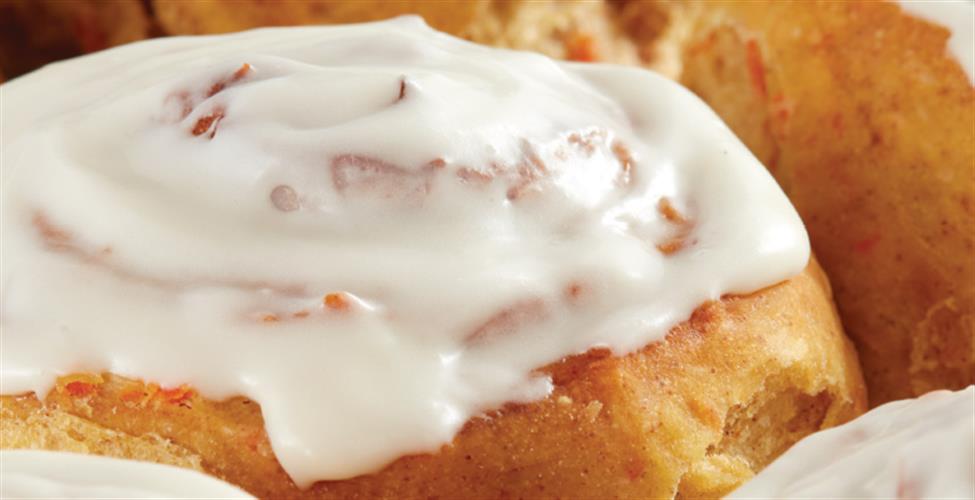 Make It Customizable for Consumers—and Efficient for the Kitchen

A bakery without a display case? It works at Duck Donuts, a regional bakery chain headquartered in Pennsylvania. When consumers walk into a location, instead of seeing piles of finished donuts to choose from, they’re greeted with a design-your-own menu, featuring 11 coatings, seven toppings and 12 drizzles. Once an order is placed, staff assemble it in minutes. “Customers love the taste of fresh donuts, but they also come back for the experience,” says Kristin Kellum, a Duck Donuts spokesperson. “We can give each customer exactly what they’re looking for.”

For bakeries considering testing customizable breakfast offerings, relying on mixes, pastry sheets and other premade ingredients can help. They save time and money, freeing up resources. Staff can focus on creating memorable made-to-order donuts, muffins, pastries and other morning goods, while owners can more easily manage ingredient orders.

One way to elevate traditional offerings is with global ingredients. Youcef is experimenting with different ethnic flavors for his Bruffin. “We’re stepping into Asian flavors, with a riff on kimchi and Korean BBQ, and also working on an Australian Bruffin that uses Vegemite, a savory spread that feels like Nutella but tastes like vegetable bouillon.”

Moxie Bread Co. takes a different route. The bakery’s team spent months perfecting the recipe for kouign amann, a French pastry similar to a croissant but intensely sweeter thanks to caramelized sugar.

“When we opened, I knew it was such a slam dunk it would be the centerpiece offering in our pastries,” Clark says. And to put his own spin on the super sweet classic, he stuffs the kouign amann with fillings like organic peaches and goat cheese, dates and honey.

At Twenty40 in Los Angeles, breakfast gets a flavor kick with options like the fougasse, a football-shaped flatbread. Topped with ricotta, oven-blistered heirloom tomatoes and oven-roasted garlic, the pastry is as aromatic as it is flavorful. “We also have a poached egg dish that gets served with bacon jam and roasted mushrooms, and it’s all these intense, really great sweet and sour flavors,” says co-owner Nathan McCall. “It’s such an awesome thing to eat for breakfast.” And it sets Twenty40 apart in an area crowded with other breakfast options for hungry diners.

For many consumers, being healthy doesn’t always mean counting calories or abstaining from sweets. Seventy-five percent of people are concerned about the long-term health impact of artificial ingredients, and more than half think a shorter ingredients list means a more healthful item, according to Nielsen. “To many consumers, simple is beautiful, and foods with a short list of recognizable ingredients resonate strongly,” the company’s report notes.

Among consumers who frequent Moxie Bread Co., healthy also often means a short supply chain and transparency. “People like to come in and see the person covered in flour who’s making the bread or see the person making their sandwich by hand,” Clark says. Fresh and local are both descriptors that draw interest from health-conscious consumers, and bakeries can incorporate those words into everything from display case signage to social media posts. “Customers want to support bakeries that are using fresh and local ingredients,” Clark says. “And they’re willing to pay.”