Shortly after opening Wild West Bakery & Espresso in Eagle, Idaho, Naomi Preston began offering muffins and scones baked in-house. Within a year of investing in a half-size convection oven and 12-quart tabletop mixer to make the goods, the resulting increase in business paid for both.

Encouraged by her clientele’s reaction, Preston began serving other dishes. "We added a couple of breakfast and lunch items; typically things baristas could make,” she says. "It started small, and I gradually added more complex items and full-time cooks."

The kitchen’s range of offerings eventually became so substantial that Preston changed the business’s name to Wild West Eatery & Cantina. The menu now includes lunch and summer dinner service, featuring items like burgers and fish tacos alongside baked goods like cakes and sticky buns. “We doubled our customer base when we added meals,” Preston says.

What to Expect When Expanding

In 2007, Pastry Chef Peter Rios, owner of Alliance Bakery in Chicago, decided to start serving sandwiches and salads after noticing a number of patrons were spending several hours studying or working at the bakery.

"Realistically, our savory program is a small part of our business, but the way I see it, it’s a customer service we provide," Rios says. "If they come in for coffee and a pastry and later are still here, there’s an option to have a sandwich."

Although adding meal service can potentially increase profitability, the ingredients, manpower and other components needed to produce breakfast, lunch and dinner dishes can be expensive.

"Make a plan," Wood says. "Really try and understand what is missing in the local marketplace, and see if things can be made to fill those needs."

If a bakery is contemplating offering heartier fare, the following elements can help make meal service a success:

Bakeries may require additional tools to produce different kinds of goods, so be prepared to invest in additional equipment. For example, Rios bought a $600 table slicer to cut sandwich meat and invested in colored cutting boards. “Once you start handling raw chicken breast for a salad, you don’t want that touching any other cutting boards you’re working with,” he says.

Along with new equipment, a bakery expanding to meal service may also need to add to its staff or change schedules to maintain smooth operations and service. To accommodate neighborhood customers looking for a quick lunch spot, North Bakery in Providence, Rhode Island, added a rotating three-sandwich menu a year after it opened in 2014.

Last spring, to capture some of the overflow from its nearby sister restaurant, North, the bakery started serving cocktails and small plate dishes in the evening from Thursday to Sunday.

"We thought, 'We have another restaurant right down the road, and this place isn’t being used during nighttime; how can we get people waiting at the restaurant to give us business?'" says Head Baker Courtney Cleaver. The additional hours meant the bakery needed more food prep time, so it staggered employee schedules. “We have a pretty much separate staff, as far as bakers and savory people," Cleaver says. "We had to make some changes to be here earlier or later."

The bakery has treated its evening shift as a test to see how popular—and potentially profitable—expanded hours could be. "Keeping an eye on how much we’re spending is always a factor," Cleaver says. "There’s been no real loss; hopefully, we’ll see a gain in the next few months." 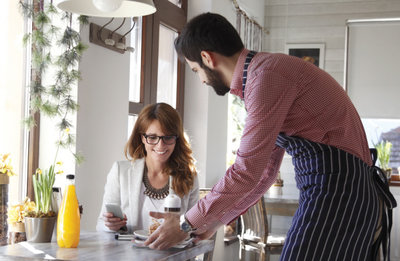 For neighborhood businesses like North Bakery that cater to local customers, the news of extended hours spread quickly.
"When people see the lights are on at 7 or 8, they poke their heads in," Cleaver says.

Social media also helps. Preston, who used direct mail, magazine and newspaper advertising when Wild West opened 22 years ago, says she now invests in Facebook advertising, which allows businesses to select which users will see ads for the bakery in their newsfeeds.

"It’s more targeted," she says. "So your money is better spent because you’re really going after people in your town or the ones who liked your [Facebook] page."

Determining ingredient amounts and how many products the bakery should prepare can be difficult at first. Starting with small orders and thinking about how to get the most of out of ingredients worked for Rios.

To avoid overbuying and waste, when introducing his sandwich program Rios decided to use uncut meat portions, instead of presliced cold cuts. “If it’s a whole piece, it lasts longer because there’s less exposure to air—once you get it sliced and packaged, you’ve got about four to six days to consume it,” he says. “A whole piece, covered every day, will give you about a week and a half. We can get 100 sandwiches or more out of it.”

The eatery initially only produced small sandwich quantities—sometimes three or four. Rios figured they could make more if needed.

"Ironing out what people like and tend to buy more often can be challenging because we’re not a sandwich shop," he says. "We want to create the savory portion and move back to our core business, which is pastries, cakes and desserts."

For bakeries testing out meal-based menu items, Wood advises progressively amping up. "You have to be careful balancing the range of options you have and being able to manage their production,” he says. “Starting out too big can be potentially overwhelming. It’s always easier to add things than to take things away."

If growth is gradual, and the bakery’s customer base truly is hungry for more substantial fare, serving meals alongside an array of fresh cupcakes, donuts and other baked goods can help expose the business to an entirely new crowd.

"Not everyone wants a muffin—maybe someone wants a slice of quiche or a panini and a bowl of soup," Wood says. "You’re going to attract customers who are looking for different options."