The Sweet Side of Going Green

Maury Rubin is an early adopter. His New York City-based City Bakery has used green practices since it opened in 1990. Fifteen years later, when Rubin launched a new, dedicated retail bakery, making sustainability a big part of its persona was a no-brainer. He didn’t realize it would be a major draw for customers, but they came in droves to Birdbath Bakery’s 240-square-foot storefront, adorned with LED lights and walls made from sunflower seeds.

“When we opened, it attracted a huge amount of attention right away, and that was really driven by people’s interest in [our use of] green materials,” Rubin says. “The embrace of it was so strong, after about six months, I knew I had discovered a new bakery model.” In the following decade, Birdbath’s popularity spawned six more locations, and Rubin saw the concept spread throughout the foodservice sector.

For the past several years, chefs have identified environmental sustainability as a hot food industry trend in the National Restaurant Association's annual culinary forecast—and with good reason. Bakeries that reduce energy use, cut water consumption and make other sustainable moves often see overhead costs drop as a result.

Adopting green practices can also often have a positive effect on customer satisfaction. Rasma Zvaners, policy director for the American Bakers Association, says her organization’s members report bakery retail customers and consumers are expressing a greater interest in green practices. “Customers are asking more questions about what baking companies are doing to be more sustainable,” she says.

While foodservice businesses of all kinds are taking steps to become more eco-friendly, bakeries face unique challenges other eateries may not, according to Scott Weiner, co-owner of Chicago’s West Town Bakery. Bakeries have more paper waste than many other foodservice businesses, he says. Every muffin is in a liner; each to-go coffee comes in a disposable cup with a sleeve. Biodegradable bags and other items are an option, but they can be costly. “You can only get [a good] price if you buy [bags] in bulk,” Weiner says. “Every time we buy new ones, we’re spending $10,000 to $12,000.”

Bakeries can evaluate how paper and plastic are used throughout
the bakery—from baking in the kitchen to sending customers
out the door with a package of goods.

A smaller step bakeries can take is evaluating how paper and plastic are used throughout the bakery—from baking in the kitchen to sending customers out the door with a package of goods—and then determining how material waste could be reduced at each stage. For example, offering a slight discount on coffee to customers who reuse their cup or bring a mug can help decrease the number of paper cups that end up in the trash. Another potential waste-saver is handing customers one or two napkins with their orders, rather than leaving a dispenser out.

Four out of 5 consumers deem reducing food waste as important as reducing packaging waste, according to research from market intelligence agency Mintel.

Cutting how much food gets tossed starts with monitoring the bakery’s trash. “If you keep consistently throwing away apricots, change the menu to use them more often, or don’t order as much,” says Jeffery Clark, director of the National Restaurant Association’s Conserve program. “Or change what you’re doing because your customers [maybe] just don't like it.”

Regardless of smart ordering, there will always be some leftovers. Put those products or ingredients to use—and profit. Several years ago, Portland, Oregon’s Pearl Bakery debuted its cinnamon crown pastry, made from scraps created when croissant dough is fed into the bakery’s rolling pin machine. The scraps are baked in muffin tins to create cinnamon crowns. Today, it’s one of the bakery’s best-selling items.

Foodservice establishments’ water and wastewater service costs have risen at a rate that’s well above the consumer price index in the past decade; and the Environmental Protection Agency estimates they’ll keep rising.

Overall, the EPA estimates implementing water-efficient practices in commercial facilities can cut operating costs by roughly 11 percent. To start, Clark suggests bakeries fix leaks in bathrooms, add aerators to hand sinks and install an approximately $70 water-efficient pre-rinse spray valve (PRSV) designed to remove food from dishes before dishwashing in sinks. “Spray valves can save $300 a year on the low end,” he says. “On the high end, they can save thousands a year.”

The foodservice sector spends $10 billion a year on energy; nearly 80 percent of which is lost to inefficient cooking, holding and storage, according to energy-based holding company PG&E.

Bakery owners and managers are often surprised at how much energy and water a few easily implemented best practice changes can produce, according to Richard Young, lead engineer and director of education at PG&E Food Service Technology Center.

“For instance, dirty condenser coils in refrigeration equipment can double the cost to operate, and bakeries are especially notorious for dirty coils because of all the airborne flour,” Young says. “An aggressive coil cleaning program will save money and help prevent equipment failure.” 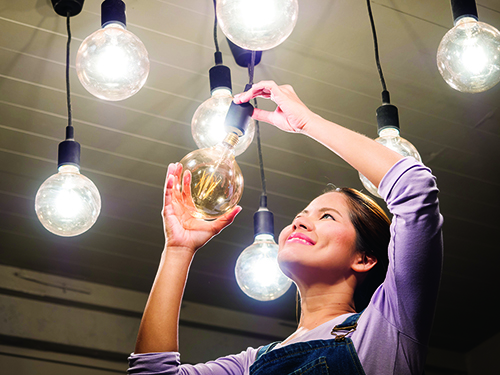 “Bakeries often have lots of old, inefficient linear lighting fixtures,” Young says. “The newest LED fixtures will often pay for themselves in a year or less.”

Two years ago, Pearl started replacing all incandescent bulbs in its ceiling lights, which frequently burned out, with LED ones. “It costs a little bit more per bulb, but I haven’t replaced a bulb since I installed them, they’re not hot when lit and use a lot less energy,” Lester says. “I’ve seen a reduction in the energy bill.”

Wholesale bakers are increasingly focused on better understanding their entire supply chain, according to Zvaners. When Lester first began looking at ways he could incorporate sustainable practices, the former CPA immediately honed in on purchasing. Today, the bakery buys flats of fruits and vegetables from a local farmers’ market.

“Of course, the biggest item you’re purchasing is ingredients,” he says. “I’m hopefully minimizing travel and the power and fuel required to bring the product to customers.”

While not all bakeries have the cash to make drastic structural changes, as you remodel or expand to new locations, sustainability should be a priority.

When Lester opened Pearl’s second location, his son, who has an electrical engineering degree, persuaded him to install a LEED-certified roof. (Leadership in Energy & Environmental Design—LEED—is a green building certification program that recognizes best-in-class building strategies and practices.) Lester estimates it cost $5,000 more than a standard roof would have.

A green roof has a life of up to 60 years; helps reduce HVAC costs; and can qualify for government subsidies.

In general, a green roof has a life of up to 60 years, two to three times longer than a traditional roof; helps reduce HVAC costs; and can, in some areas, qualify for government subsidies. In addition, to maintain the temperature and dough quality in the bread production room, Lester installed a device he describes as a “great big sock” that brings outside air inside, in lieu of air conditioning.

"The LEED-certified roof and air delivery system initially involved big capital costs,” he says. “But with $1,500 to $2,000 a month in [air conditioner] electric power savings, in one year’s time, we’ve easily paid for both those things.”

Owners may have the best intentions about making their business more sustainable, but seeing changes through can prove difficult.

Clark recommends networking with other businesses to see what sustainable practices they follow. In addition, contacting the bakery’s utility provider about potential rebates and incentives may uncover more opportunities to save.

“Start with one thing, be it food waste, or switching out light bulbs or composting,” he says. “When you have more time, do the next thing. It’s impossible to do everything at once.”

As Weiner says, at the end of the day, some customers will choose a bakery because of its cupcake prices, not its environmentally friendly practices—so aim for sustainability efforts that strike a balance between making a cost-effective impact without compromising core products.