When the bakery opened in 2014, Vrignaud was confident his posts were showing up in his followers’ timelines. But as Facebook’s algorithms changed, Moulin, like other businesses using the platform, found only a small portion of followers actually saw the restaurant’s posts in their news feeds.

“Facebook doesn’t show posts to everyone who likes your page,” says Janine Monico, vice president of SEOM Interactive. “It can be difficult to post frequently and expect results if you’re not putting money behind it.”

That’s why Vrignaud began paying to boost posts—the only advertising Moulin has ever done.

Advertising on Facebook opens the door to more engagement with followers, and it can help reach potential customers who aren’t yet fans of the bakery. Here’s where to start.

1. Boosted Posts: Paying to amplify the reach of organic posts, which Moulin does, is a great starting point. Boosting ensures posts appear more frequently in the news feeds of a specific audience.

2. Paid News Feeds Ads : These ads target potential new followers. Paid ads include the bakery’s name, text, an image or video, a link to its website and a “Like Page” button.

3. Right Column Ads: Appearing in the margin of users’ news feeds, these only include an image, text and a website link.
They’re most effective for bakeries that want to drive traffic to their websites.

Facebook makes it easy for bakeries to choose criteria for whose feeds they populate, including both current and potential followers. For instance, an owner can place a wedding cake ad targeting 24- to 32-year-old men and women who are in relationships and within a 10-mile radius of the bakery. 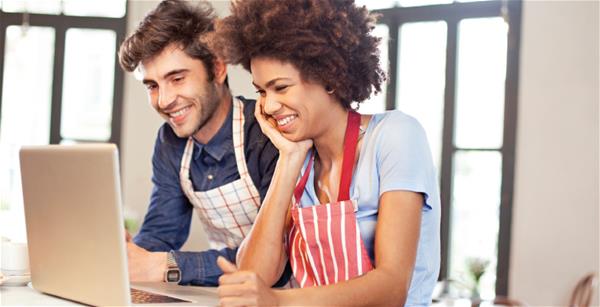 Facebook uses an auction system that helps bakeries choose how much they’ll pay to reach certain audiences with each ad. Prices fluctuate based on demand. For example, getting eyes on a pumpkin pie post in November will cost more than it will in July.

The good news is that no budget is too small—a major advantage Facebook advertising has over print ads, radio spots, TV commercials and other types of digital advertising. Businesses can set a daily budget or a lifetime budget, according to Monico. “For small, local bakeries, even $25 a month is not a bad budget,” Monico says.

Facebook advertising takes time, something bakery owners don’t always have a lot of. Develop a monthly calendar that includes at least one post a week, Monico advises. Then, upload all posts—both paid and organic—using Facebook’s scheduling tool. It’s an agile platform, so owners can easily throw in an extra ad or boost a post.

When an organic post is performing well, Facebook alerts page administrators, giving them the option to boost those posts in real
time. Set aside a few minutes every day or two to review page notifications to ensure the bakery responds quickly to activity.

“The biggest benefit of a social media strategy is that it’s all trackable,” Monico says. “[With a] radio ad, you just know how many people listen to the station, whereas with Facebook, you can tell exactly how many people clicked through on a post.”

Monitor and record top-performing ads to identify commonalities. For example, videos may outperform images, while posts that include questions may drive more comments.

Bakers wear many hats, and marketing isn’t always their primary focus. However, dedicating a small amount of time and budget to advertising on Facebook can pay off big.